The effect of optimization on cognitive load

Lately, I’ve been exploring what the tradeoffs of optimization are. That is, when we try to optimize what we do in work and life, what are the effects? What actually gets worse when we try to make things better?

One that seems obvious is that more optimization leads to higher cognitive load. The more we want to do something well, the more mental effort we’ll have to put into doing that task. This doesn’t just amount to the additional work needed to do something well, but I hypothesize that optimizing also seems to involve a second track of thinking, running alongside the track of the action itself, that is dedicated to observing how we are doing that action and evaluating whether we are doing it well or not.

If we assume that the need to optimize increases cognitive load, either beacuse the desire to do something well involves more mental effort, or because the simultaneous reflexive self-evaluation of our performance requires us to perform two tasks (the main task and the optimization task) at the same time, we can make a few hypotheses:

Optimization may lead to avoidance and procrastination. — A desire to optimize how well you do a task, which leads to cognitive higher load, may make us avoid that task more. Common sense tells us that we are inclined to avoid tasks that are cognitively demanding. Having a desire to optimize on a task may make us procrastinate on that task, since we have such a high bar of performance when we carry out the task that it feels daunting.

Take one example: I have to send out a bunch of cold emails. I want to send out the perfect cold emails since these are very important emails, but that makes the task of “send cold emails” more difficult and daunting. As a result, I tend to avoid the task beacuse I added the need to optimize to it. If the task was simply “send cold emails” without an optimization element, I’d be able to send out some damn emails. But if I attempt to optimize the emails and as a result procrastinate to the last minute, rush the emails, and send out crappy ones because of the time pressure, that amounts to a very bad optimization on the whole.

Optimization may undermine performance. — If optimization takes up a certain level of cognitive resources, then the act of optimization can actually decrease performance. Research has found that increased cognitive load, represented by increased working memory usage, can decrease performance (Ward & Mann, 2000). One group of researchers suggest that “cognitive load has a detrimental effect on goal pursuit by diverting processing resources away from the goal” (Vohs, Kaikati, Kerkof, & Schmeichel, 2009). As a result, the need to optimize may lead to us ‘overthinking it’, or exhaust more cognitive resources, which may lead to us actually doing worse on a task even though we are ostensibly attempting to optimize how well we are doing it.

Perhaps this is what is behind Buddhists’ conception of the “beginner’s mind,” the unexperienced, unprejudiced mind that does not try too hard to optimize, which we might consider as the source of “beginner’s luck”. Or this might be why (to pull a story from Timothy Gallwey’s The Inner Game of Tennis) a tennis player might be in the zone, but once his opponent comments on how well his backhand is doing today, he reflexively tries to understand what exactly he was doing with his backhand that was working, leading to him losing his streak.

With both of these, we see that there may be a tradeoff between the desire to optimize and the effects of cognitive load. Optimization is a good thing, until we try to optimize too much. Then, it might lead to avoidance of the daunting task, or to decreased performance on the task. Perfectionists—those who optimize to an extreme degree—may actually find themselves doing worse and procrastinating more due to the need to be perfect. What do we do about that? 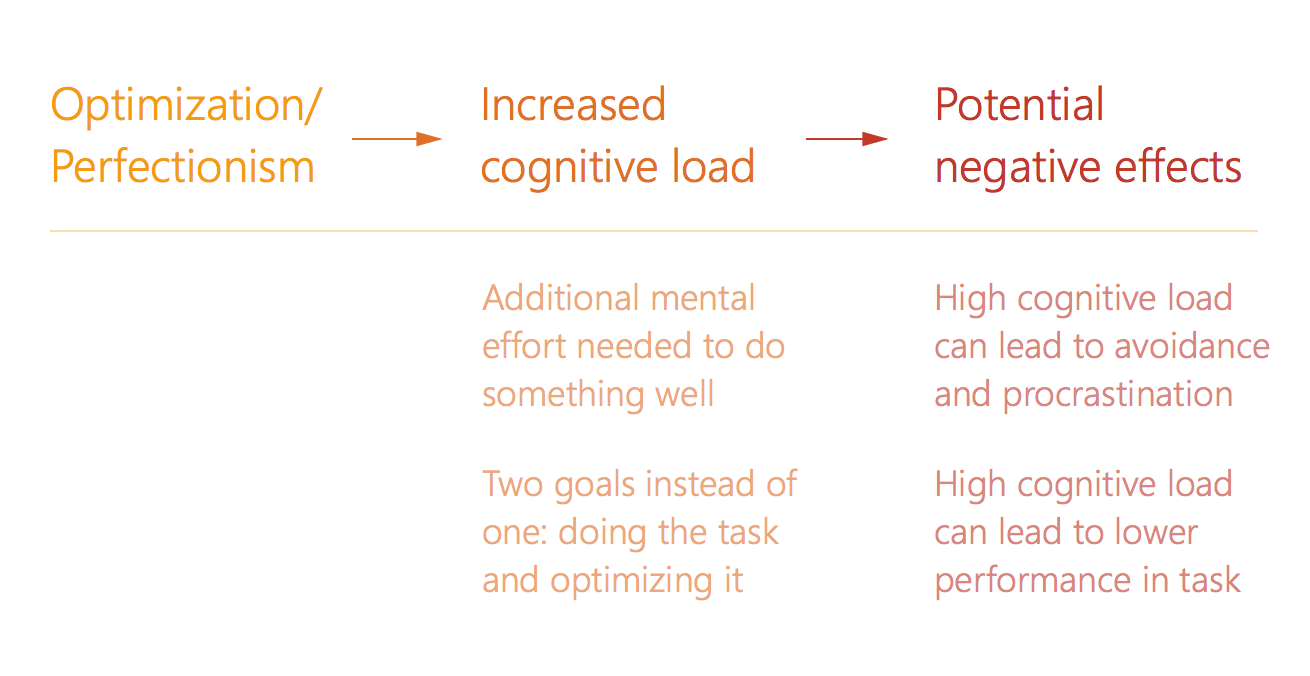 Here are three counter-strategies that I think may be interesting to consider:

Increase cognitive capacity or willpower. — If the problem is that optimization makes us procrastinate, we may be able to continue to optimize at the same level if we come at it from the direction of training ourselves to procrastinate less and focus more. As someone that has been able to do this for short stretches of time, I know it’s possible, but the difficulty is sustaining this long-term. The negative impact of optimization on task performance, however, is more difficult to solve.

Rebalancing. — The potentially better option is to be aware of when one’s desire to optimize is causing procrastination or decreased task performance. Then, keeping the end goal in mind, we may try to shift the balance of optimization so that we are optimizing less but also freeing up cognitive resources so we can either reduce procrastination (so we can do the task in the first place) or increase performance (so we can do that task well). Educational psychologists have used cognitive load in conjunction with the concept of the zone of proximal development to advocate “reach” goals, which is in the space between goals we can easily achieve and goals we are unable to achieve (Schnotz, 2008). We may take the same approach, finding, say, a zone of proximal performance, where we are still optimizing what we are doing but not so much that it becomes cognitively overbearing. Striking a better balance seems to me to be an effective way to hit the sweet spot of optimizing enough but not to the point of excess.

Separate doing the task and evaluating performance. — We might be able to reduce the detrimental effect of optimization on cognitive load and performance by segregating the processes of “actually performing the task” and “evaluating our performance”, doing them sequentially instead of simultaneously. Taking the example of writing cold emails, I might write a cold email out, promising myself to review it after I’m done, instead of worrying about how to make each part perfect. When I’m done, I can shift into an ‘evaluative’ stage. This way, I can separate the two tracks of performing the task and evaluating how I’m doing, potentially reducing the negative effect of cognitive load on performance by not needing to keep the two tasks in mind at the same time.

As we can see here, optimization is a double-edged sword. I hypothesize that it can be really beneficial when used correctly, but potentially detrimental and counterproductive when taken to excess. In my next post, I’ll talk about another tradeoff: the tradeoff of optimization with contentment and happiness.

Thank you to Quinten Farmer and Dan Shipper for reading a draft of this post.